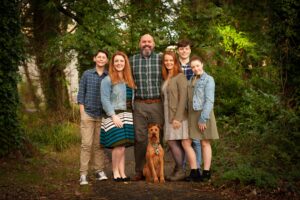 Joshua first visited Ireland in 2010 as part of a team from Canton who came to help run the MBF Summer Holiday Bible Club. Following this experience, he felt the call of the Lord to serve Him in Mallow Co. Cork and spent the next 4 years preparing to make this move.

He came to Mallow Bible Fellowship in January 2014 with his wife Denise of sixteen years, and their four children Connor, Chloe, Clark, and Catherine.  He began by taking on responsibility for the youth ministry in the church. In 2015 he was appointed Lead Pastor with overall responsibility for the growth and spiritual development of the church. Pastor Josh spent the next four and a half years establishing and planting the church in Mallow. MBF grew in understanding of God’s Word and numerically under his leadership. Since then he has felt the call to plant another like-minded Baptist Church in Tralee, Co. Kerry in 2019. He also loves spending time with his wife and children and has a real heart for people. He is active in the community and is an avid outdoorsman.

Denise is a domestic engineer aka homemaker. She also disciples other ladies, has book club studies and leads the women’s ministry at the church. Denise has a real crafty side and loves to make handmade cards. She also is an avid runner competing in 5k, 10k and half marathons.

Their children all attend local schools within Tralee, Presentation and The Green. Their children have a variety of different hobbies including drama,  music, Rugby and Rowing.